Connect with us
Related Topics:

International street artist and controversial figure Banksy has struck again, and this time it’s in the West Bank.   The Artist Banksy secretly opened up a nine-room Palestinian guesthouse/hotel in Bethlehem last weekend. The hotel has a catchy name too, The Walled Off Hotel.

The street art filled hotel is set to open on March 11, and is open to journalists now. Rooms are available for $30 a night, so it’s quite affordable. The hotel is situated right next to the West Bank separation barrier built by Israel to fend off Palestinian attacks. The views from the hotel are of the wall and that’s it. 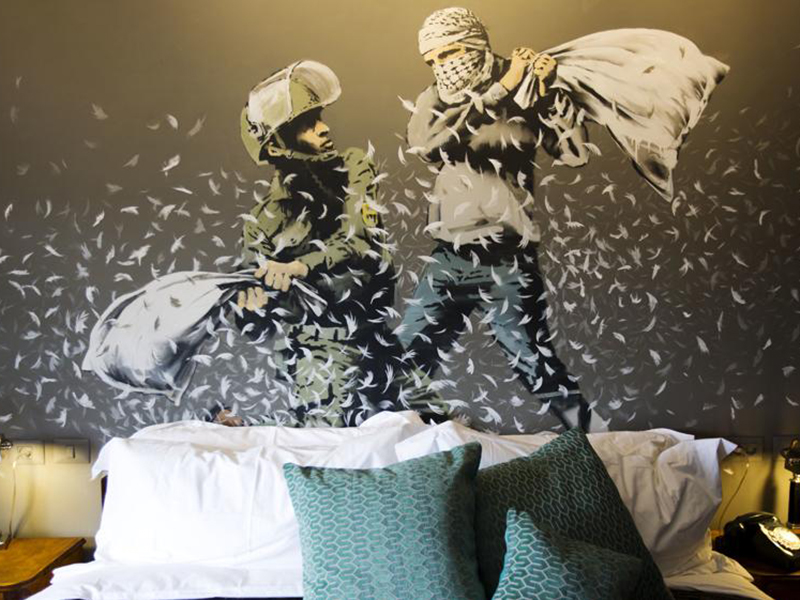 International street artist and controversial figure Banksy has struck again, and this time it’s in the West Bank.   The Artist Banksy secretly opened up a nine-room Palestinian guesthouse/hotel in Bethlehem last weekend. The hotel has a catchy name too, The Walled Off Hotel.

The street art filled hotel is set to open on March 11, and is open to journalists now. Rooms are available for $30 a night, so it’s quite affordable. The hotel is situated right next to the West Bank separation barrier built by Israel to fend off Palestinian attacks. The views from the hotel are of the wall and that’s it.

Reporters got a sneak peak this week and took pictures of the artwork. The stand out was from room ‘Three” called the Banksy Room, had a giant mural of a Palestinian and an Israeli having a pillow fight.

This isn’t Banksy’s first trip to the area, last year satirical artwork sprung up all over the Gaza Strip. Banksy claimed responsibility for these graffiti attacks. Politically charged art has fueled Banksy’s success and has turned street art into an expensive art form.

The small boutique style hotel has a presidential suite and a museum displaying many of the artist’s more politically charged work. The museum looks like an old gentleman’s club from colonial times. It has a life-sized statue of Arthur James Balfour in it who created the Balfour declaration, which led to the creation of an Israeli state.

The secret project took 14 months to complete and was supervised by the mysterious artist himself. This hotel is the artist’s biggest collection of work in years and has no end date as of yet.

Banksy has been putting up politically charged street art here and in the nearby Gaza Strip. Known for satirical stencil art, Banksy has long been a thorn in the status quo. From humble beginnings in London, Banksy has become a worldwide phenomenon.
So, who’s coming to Bethlehem with me to stay at the Walled Off Hotel and see this amazing street art in person? I’ll pay for the hotel, just saying, I think I can afford the $30 a night price tag.

Already accepting reservations, the hotel will surely book up fast; let’s just hope the conflict doesn’t take this hotel as a victim.

The artist has recently dropped pieces in the area on a two-story building that was destroyed in a battle between the Israeli forces and Palestinian people. Children are living through this never-ending conflict and at least now they have some attention brought to them that isn’t negative. I can’t even imagine growing up in these types of situations and I feel for any child who has to deal with that. Unfortunately these kids have no choice as to where they are raised but Banksy sees that and is making it’s a cause we can all get behind.

Check out this awesome art experiment and support artists like Banksy who see an issue and is doing something about it. 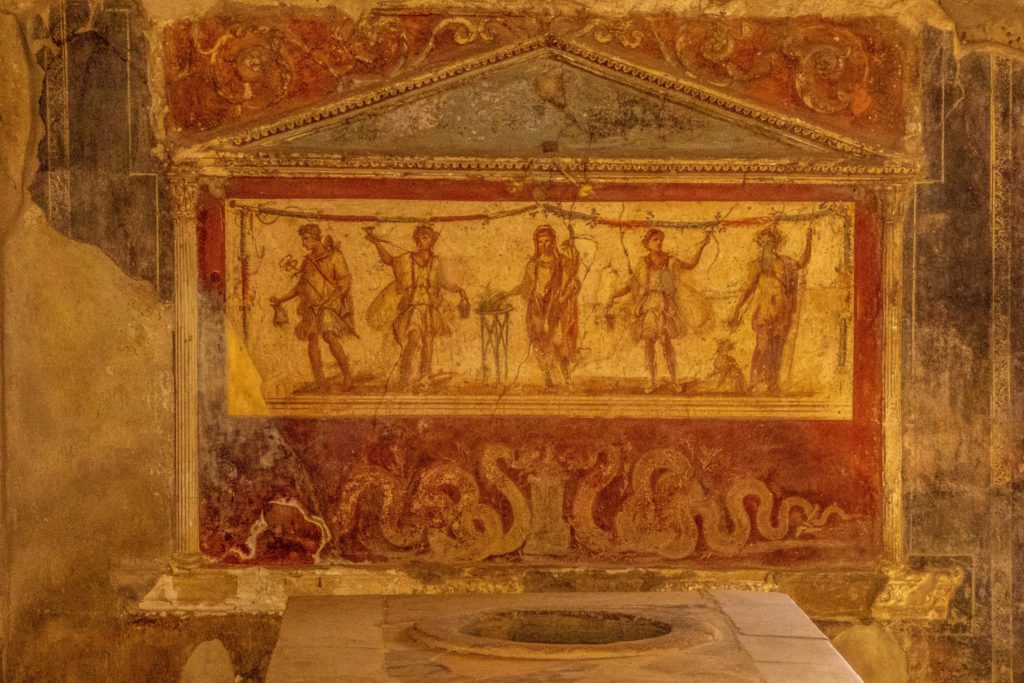 A Canadian woman returned Pompeii artifacts, 15 years after they were stolen from the Pompeii site.

Prof. Massimo Ossana, the Archeological Park of Pompeii’s temporary director released a statement last Tuesday confirming the return of five stolen artifacts that were sent back via a travel agency. The said agency, then, contacted the Carabinieri police regarding the matter.

The artifacts, which were accompanied by a letter, were brought back to the archeological park. However, they cannot be returned to their specific, original spots within Pompeii’s old ruins. “Obviously they cannot be relocated because their precise origin is not known,” Osanna shared.

According to The Guardian and CNN, the Canadian tourist’s missive narrated her experiences of bad luck right after she took the Pompeii artifacts back in 2005. She mentioned that she went through financial and health problems because of them. “We are good people and I don’t want to pass this curse on to my family,” the woman explained.

In relation to the incident, Ossana mentioned that stolen artifacts get frequently sent back to the archeological park that features the ruins of an ancient Roman city that got destroyed by the violent eruption of Mount Vesuvius in 79 AD. Many of these items are returned due to the same reason—that the artifacts are accompanied by a curse, bestowing ill luck to those who take them from their resting place.

“For several years, the Archaeological Park of Pompeii has been receiving letters from visitors who, on the occasion of their visit, had taken small objects (we are talking about mosaic tiles, small shards, stones, pieces of plaster, lapilli), of little value, but part of unique archaeological heritage, and that they decided after years to return, claiming to have derived only bad luck from that act,” the Archeological Park of Pompeii’s statement said.

Consequently, the statement also mentioned that the supposed curse that accompanies the artifacts found at the park serves as an effective deterrent for anyone who wishes to take or steal other Pompeii items in the future. “But we hope that an international civil awareness towards cultural heritage in general will increase, regardless of the fear of a bad luck that could affect those who make such gestures,” Osanna continued.

Stealing items from famous archaeological sites and tourist destinations is a rampant activity. However, visitors to these heritage areas must be aware of the necessity to preserve these artifacts because they serve as actual, historical objects that provide current and future generations with the means to understand how our ancestors lived in the past. Preserved artifacts are living testaments to the people who came before us, offering us a glimpse into their lives—how they lived, how they interacted with one another, and how they died.

Knowing what happened in the past—how people survived in the past—provides us with the necessary knowledge to improve our present lives and the lives of future generations. Hence, it is essential for everyone to preserve these archaeological and historical sites—and understand the significance of their continued presence in our modern existence.

Thailand Plans to Welcome Back International Tourists by October

Hope is knocking on the door of travelers who are anxious to spend their Christmas holidays in Thailand. However, provided that they are willing to spend a few weeks in a kingdom with limited areas.

During a public forum held in August 2020, Phiphat Ratchakitprakarn, Thailand’s Minister of Tourism, said that the country is planning to allow foreign tourists to enter the country under the program, Safe and Sealed. He claims that he has already asked the prime minister to approve the expected date of opening on October 1. Ratchakitprakarn says that he has already requested Phuket as a model and has gotten approval from the Center for Economic Situation Administration. Upon launching the program, tourists will be able to enter Thailand’s largest island, Phuket. However, travelers will need to stay in quarantine in a selected resort for not more than 14 days upon arriving.

According to Phipat, the famous Patong Beach is an excellent example wherein three to four resorts are set up there. Keeping the tourists in the area would allow them to spend time on a beach, given that they would stay in their designated areas. Travelers are also required to get tested for COVID-19 at the beginning and the end of their allotted quarantine period. However, the minister says that tourists who want to travel outside of Phuket would have to undergo a third COVID-19 test and have an extension of seven days under quarantine. Besides that, hotel staff who work in the designated areas aren’t allowed to leave the premises without taking a COVID-19 test and going into quarantine.

Governor Yuthasak Supasorn of the Tourism Authority of Thailand has told CNN that the government has approved the travel plan. The next phase would be holding a public hearing to obtain the residents’ approval.

The Step for the Future

Like most countries who have always relied on tourism, Thailand has been hit pretty hard by the pandemic. Aside from having all international commercial flights being banned, the residents on returning flights would have to be put into quarantine for 14 days. Gratefully, Thailand hasn’t had a locally transmitted COVID-19 case for more than three months now, which gives travelers a sense of relief as they go on trips for the weekends. Managing director Bill Barnet of the Asia-focused consulting firm C9 Hotelwork claims that welcoming international travelers is the right step.

According to Barnet, COVID-19 is different compared to other events like 9/11 and the restart of traveling. He claims that the Safe and Sealed program may not be a silver bullet, but a step forward against “the deer in headlights position.”

He diminishes any form of criticism that says the project may be too restrictive. Barnet claims that Phuket has proven its appeal as a destination for people looking to escape the winter season. Barnet notes that Russians, Britons, Germans, and Scandinavians have always returned to Phuket yearly and stay long-term guests. He claims that the moment the temperature drops in Europe, the people will quickly mark Phuket as one of their destinations.

Thailand Plans to Welcome Back International Tourists by October

Japanese Airlines and their Procedures with COVID-19