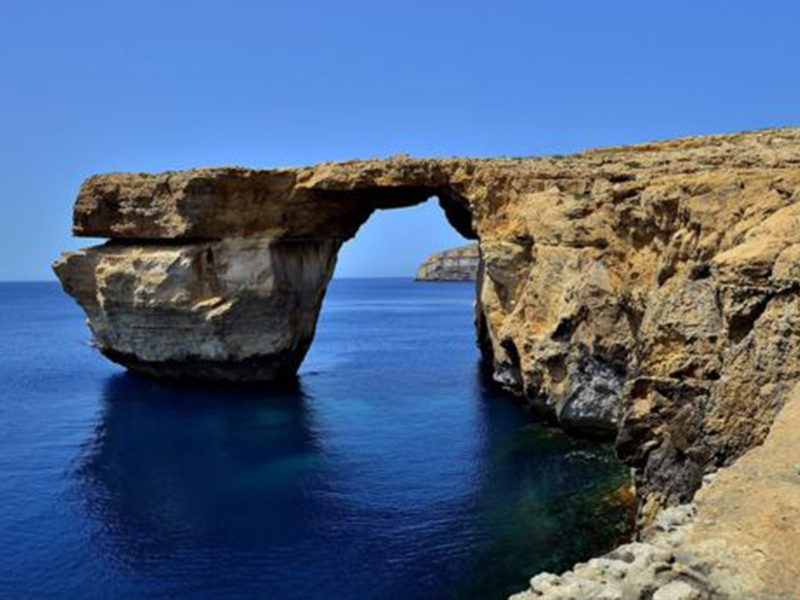 The travel world lost a legend this past weekend when Malta’s famed Azure Window collapsed after a storm.   The awe inspiring natural rock arch was destroyed by a heavy storm causing it to collapse into the ocean. Devastating to the locals, as this was a huge tourist attraction. You may recognize the famous arch form movies and television. The arch was featured in the first episode of the hugely popular HBO show Game of Thrones.

A geological study was performed in 2013 and it found that erosion was inevitable but there was no danger of the structure collapsing. Recently the arch introducing fines for people who walked on the arch, as it’s structural integrity was weakening placed signs. This didn’t stop tourist s=from venturing across the archway and onto the jutting rock formation. This wasn’t the cause of its demise though; major storms have been wreaking havoc on the island of Gozo, where the formation is located.

An eyewitness form a local town reported seeing violent waves crashing all the way up the Azure Window’s arch and suddenly it was gone.  Gale force winds were reported and the ferry company that brings tourists to the site shut down operations for the day because the weather was so bad. Storms in recent years have been getting worse and worse across the globe as global warming increases. It seems like every year we hear weathercasters forecast the biggest storm in history. That’s not a good sign that the largest and most violent storms ever recorded keep happening, year in and tear out. What can we expect in the near future as wild storms rage across the planet. Hurricanes are reaching record levels every year as well are tsunamis and the Far East.

Scientists predict that weather will only continue to get worse as Mother Nature continues to strike back at us for polluting her water, land and air.

Local residents flocked to the site after word of its collapse hit town. The Azure Window was one of Malta’s biggest tourist attractions and brought in millions of dollars respectively each year.

Could tourism be responsible for the landmark’s demise? Sure, it could have had something to do with it but as we have learned over and over again, if we piss Mother Nature off enough, she will strike back with furious anger. Nature is extremely powerful and everyone who visited this landmark could easily see that its future did not look bright. The brittle limestone that was its base is known for collapsing, so it was only a matter of time. Tourists have been seen jumping off the rock formation into the ocean, often dislodging rocks in their path. Although these rocks have no structural relevance so it’s probably not an issue.

The world is in mourning for a wonderful natural phenomenon that has been taken back by nature. Mother Nature gives and obviously she takes away, I’m just glad that so many of us got to enjoy the majesty of Azure Window.

Luckily there is a lesser-known rock window near by in Wied il-Mielah, so check that out if you are meandering around Malta with no rock formation to look at.

On average, California is gifted with a “Super Bloom” once every 10 years. Miraculously, this 2019 super bloom is the second within the last three years! 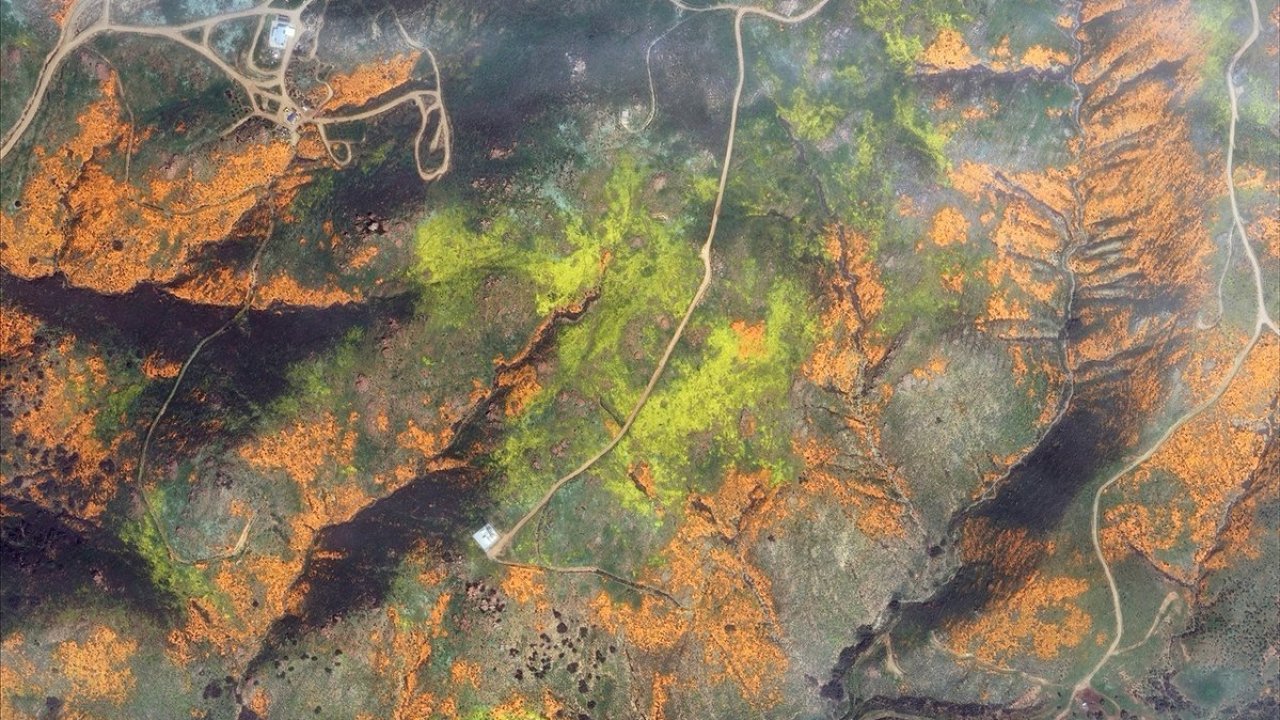 If you’re unaware, a super bloom is not some sort of apocalypse-type-flowering event. Rather, it’s the name of the phenomenon in which there is an outbreak of flowers that greatly exceeds the norm. The only chaos you’re bound to find during this naturally-occurring affair is the thousands of other locals, tourists, and travelers seeking out this nearly once-in-a-decade experience.

Colors Of The Rainbow

However, that nearly “once-in-a-decade” experience is changing. The last super bloom in Southern California took place in early 2017. Californians only had to wait a mere two years for the mesmerizing bloom to take place again. This year, an abundance of early spring rain and mountain snow have allowed these valleys to show their true colors. The cooler temperatures are also allowing the bloom to last longer than usual. Nonetheless, photographers and Instagrammers alike are capturing fields of desert dandelions, pink sand verbena, purple lupine, and vibrantly energetic poppies.

How Far Do I Have To Go?

Those located in California or travel near its borders don’t need to go far to enjoy the state-wide beauty. Traces and patches of the super bloom are visible from areas north of San Francisco all the way down to San Diego – over a 500-mile stretch. We recommend you do all your own research if you plan on making the trip of one the various parks and locations to enjoy the lovely flower but we wanted to include to give you a head start in research. If you’re near Southern California, we suggest you look into Anza-Borrego Desert State Park, Joshua Tree National Park, Desert Lily Sanctuary, Mojave Trails National Monument, & Diamond Valley Lake. 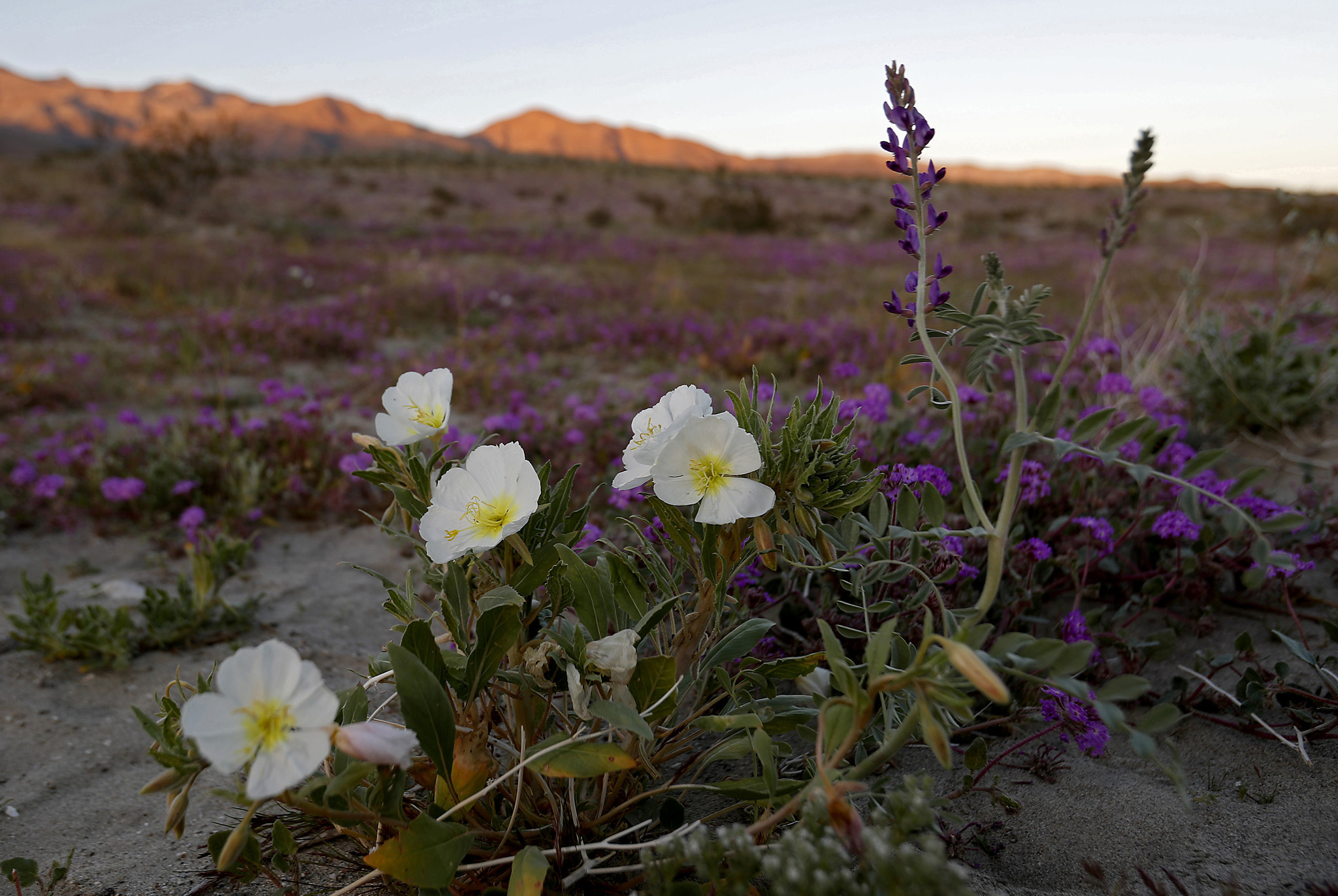 Tips To Make Every Trip Worthwhile

Additionally, we’re providing a few tips to make each planned adventure as organized and fulfilling as possible.

Check Out The Next Generation Of Theme Parks

From Disney’s new Star Wars Land to Universal Studios Beijing, there is something for everyone in these fantasylands. 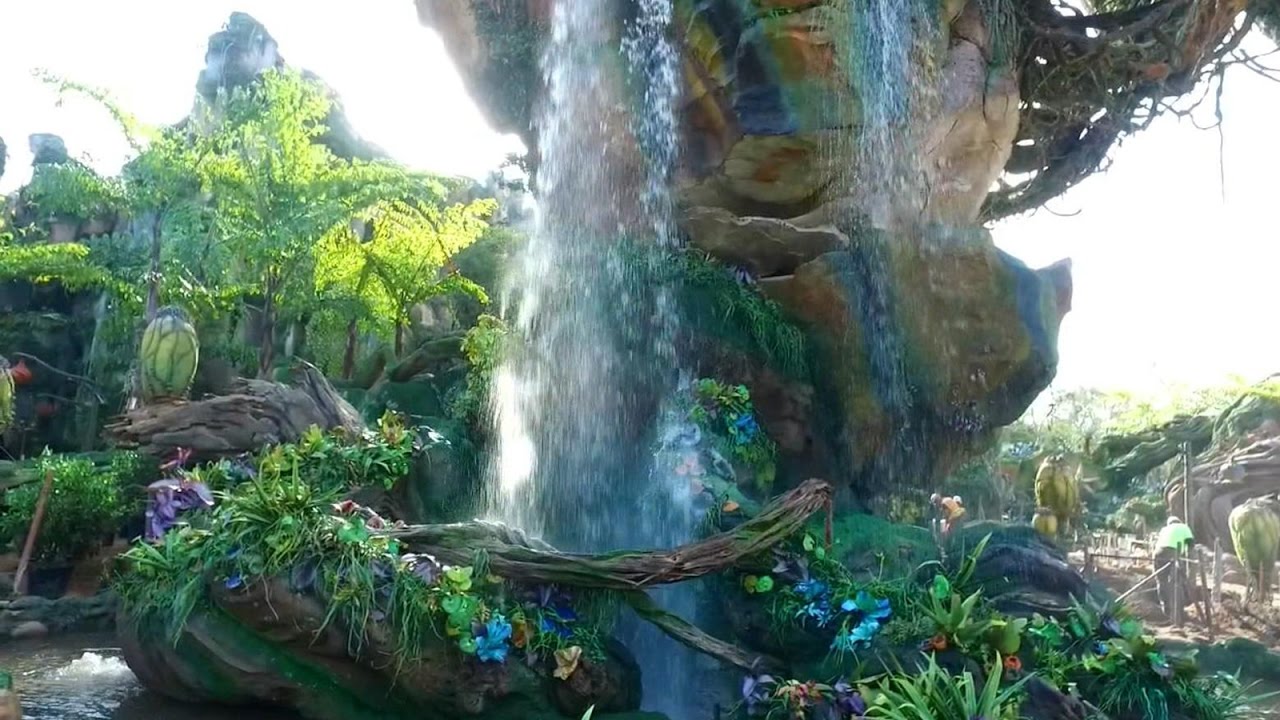 The world of theme parks is about to get really exciting in the next few years. A whole slew of awesome new parks are slated to open soon and each one has something exciting. From Disney’s new Star Wars Land to Universal Studios Beijing, there is something for everyone in these fantasylands. Let’s check out the newest crop of theme parks and see why you should be so excited.

Disney is set to unveil their latest creation, Pandora; the World of Avatar is an expansion to their Animal Kingdom in Florida. This groundbreaking theme park puts visitors into the world of Avatar and sets them on the planet of Pandora. James Cameron, the director who brought us Avatar has been deeply involved in the planning and execution of the new park. Expect lush forests of bioluminescent creatures and out of this world technology.

Disney is doing it again but this time in both Florida and California, wherein 2019 it will debut the Star Wars land. Disney purchased the Star Wars rights in 2009 for a record 4 billion dollars and has been steadily exploiting the franchise. From the concept drawings, you can tell it’s going to be massive in scale and should fully immerse fans in the Star Wars universe. I know people will start lining up for these parks early so be prepared to wait a little bit.

The long-anticipated London theme park has gone through some setbacks but it seems on track for a 2022 opening. Expect rides from Paramount icons like Star Trek, Indiana Jones, and Iron Man. This 3 billion dollar theme park better live up its enormous hype or there will be some salty Brits.

Expected to rely heavily on the brands biggest stars, Looney Tunes, and DC Comics. The completely indoor theme park will open in 2018 and is expected to dominate the landscape of Abu Dhabi. The UAE (United Arab Emirates) is a little overloaded with theme parks as of recent but this one is expected to be massive.

China’s richest man owns Wanda Theme Parks and his goal is to make his theme park company bigger than all others. There are ten mega-theme parks expected to open in the next 5 years in China and that sounds crazy. These theme parks will put all other Chinese parks to shame as they are investing in Hollywood franchises and other huge budget trademarks.

Expect huge things from these mega parks in the next few years as the technology and budgets just keep growing and getting bigger.

Spend your vacation wet from the waist down and full of booze from the bar up. 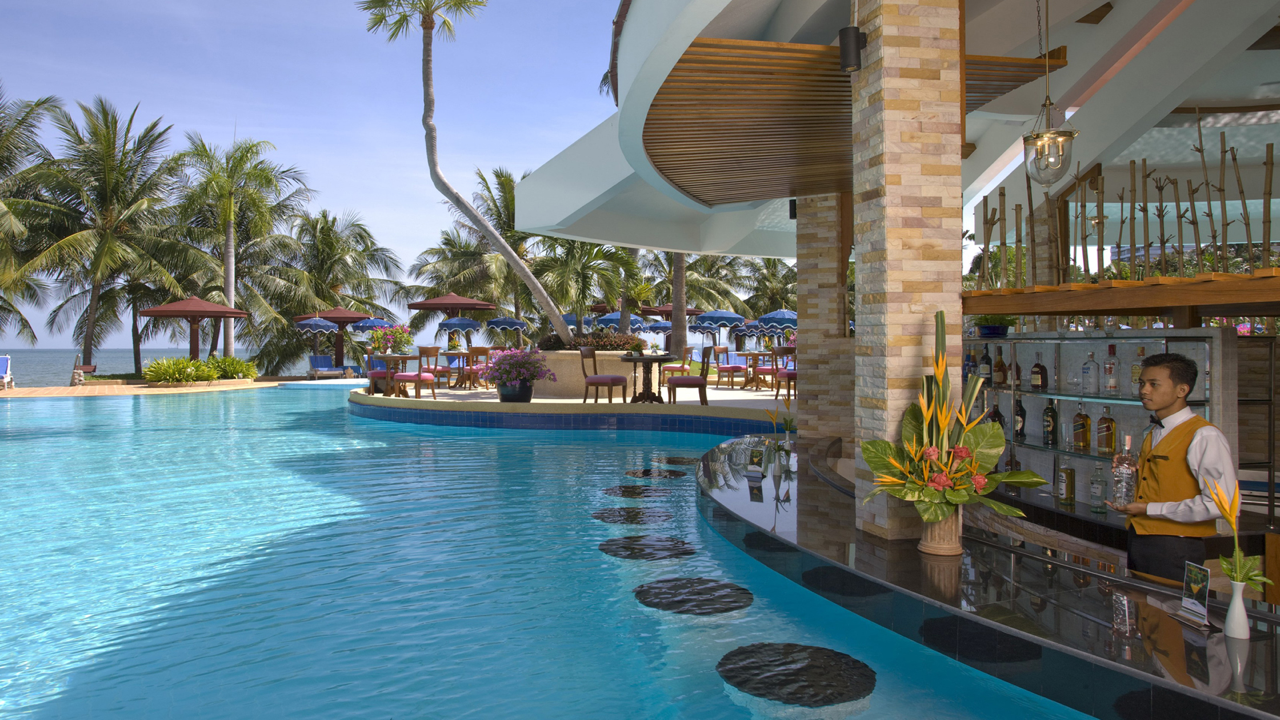 What’s more Spring Break than drinking a stiff cocktail while floating in a swimming pool? I can’t think of anything, so why throw on your swim trunks and saddle up to the best swim up bars in the U.S. with help from us at Jetlaggin. We found the top swim up bars around the nation and wanted to tell you why they’re so awesome. Spend your vacation wet from the waist down and full of booze from the bar up.

Do I even need to continue with this list after we talk about the ultimate pool party? Forget a swim-up bar, this is a full-on swim up a nightclub in the middle of the day. The pool party at the Hard Rock casino in Las Vegas is so awesome I’ve stayed in on a Saturday Night in Vegas because I wanted to really enjoy Rehab. In the summer they throw this ultimate pool party every Thursday to Monday, so tie your suit tight and get ready for the time of your life.

Quite the opposite experience from Rehab, Serenity Pool at the Four Seasons in Maui is a classy and sophisticated swim-up bar for the vacationer who wants some peace and quiet with their Pina Colada. Lucky for you, there are three different swim-up bars in three completely different pools at the Four Seasons, so if you want to party, just head over to the Adult’s Only pool.

Maybe you can’t make it to the coasts, fear not my friend, and check out the Mud Hut bar in the Kalahari resorts at the wonderful Wisconsin Dells. Imagine a swim-up bar and insane water slides mixed together, yes, it is heaven. This place has it all and it’s half indoors so even when the weather is bad, you can enjoy a stiff cocktail then head down a badass waterslide. Checkmate, sorry Maui, you lose to Wisconsin again.

Myrtle Beach is what happens when NASCAR heads to the beach so expect plenty of cutoff jeans shorts, Lynyrd Skynyrd T-Shirts, and Budweiser being slung at this hotel pool bar, but it’s a great time. These country folk knows how to get down and if the adults only pool is a rocking please do come a-knocking, you won’t regret it.

This is the fancy swim up bar we all have fantasized about but never really thought was possible. This hotel is a real fancy joint so expect an upper-class type of clientele so no beer bongs dudes.

New York City’s only swim-up bar is obviously a hot spot, there’s only one. The Room Mate Grace in Times Square has an indoor pool that is open 24/7 but the bar is only open from 10 am to 8 pm. They host a very popular gay night on Wednesday and there is a cover charge every day of the week.

Check Out The Next Generation Of Theme Parks

Don’t Say These 10 Things To Your Flight Attendant

This Camper That Doubles As A Boat Is A Game Changer